This adorable plushie of Dreamer is perfect for snuggling or holding your phone – plus every purchase has all proceeds go towards the care of unwanted horses. 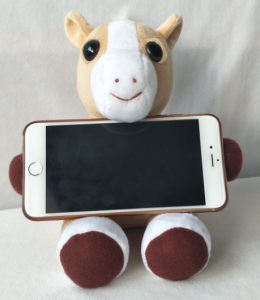 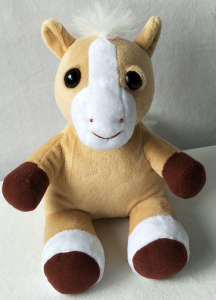 Dreamer is our movie superstar – a very special horse that was given to Lindsey because he was being too dominant and aggressive.

He had already bounced amongst several homes where he didn’t fit in and even had a habit of bucking some previous owners off.

When he came to Lindsey and Partridge Horse Hill, we made a promise to look after him, retrain him, and find a purpose for him.

This incredible gelding has warmed the hearts of many. Travelling to promote his films including Unbridled that is based on a real ranch where they pair abused girls with abused horses so they can both learn to trust again. During these travels he shows people how kind and willing horses can be.

We made Dreamer into an adorable plushie. The first shipment will arrive early December in time for Christmas. Snuggle with him or he can hold your phone while you watch a movie or YouTube.

When you order a Dreamer plushie, all the proceeds from the sale go towards the care of other second chance horses that we take in at Partridge Horse Hill. We take them in, give them health care and nutrition, and restart with Harmony Horsemanship.

We’ve helped a lot of horses over the last couple years and we want to continue doing our part to help horses in need of second chances. We can’t help them all, but we change the world for the ones we help – and your support purchasing a Dreamer plushie helps with their care, their feed, and bringing them into their new life.

Some past horses we’ve helped

We have many more success stories, but this gives you a sample of some of the horses we have helped. We really appreciate you helping us help horses in need of second chances by purchasing a Dreamer plushie.

There are no reviews yet.